Samaritan’s Purse helped thousands at our emergency field hospital in a liberated area of Eastern Ukraine.

While lying in a cot at the Samaritan’s Purse Emergency Field Hospital, Yulia was eager to share her story. Still sore from her long-awaited surgery, she spoke softly—wincing as she shifted in her bed. A nurse wearing blue scrubs branded with the organization’s cross logo hovered close by, smiling and nodding as she listened along. Yulia was safe now. She could finally be heard.

“I was really scared,” Yulia said. “I didn’t know if I would survive. We cried and were afraid. We asked God to save us and protect us so that we could survive the attacks and bombings.” As Yulia recounted her time trapped in occupied Ukraine, she fought back tears. Scenes of the violence and terror had scarred her memory—a wound no surgeon could heal. 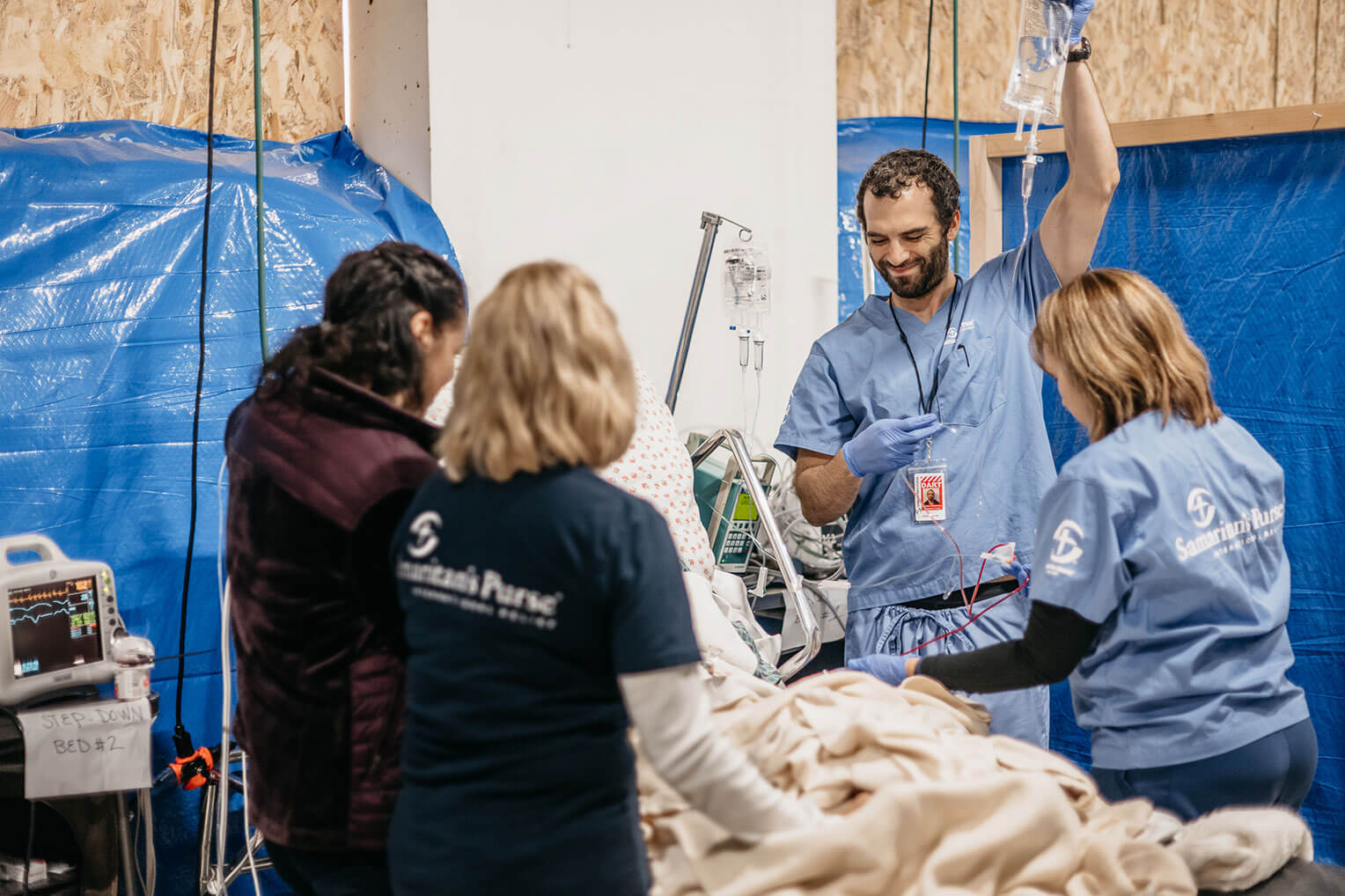 SAMARITAN’S PURSE RAN AN EMERGENCY FIELD HOSPITAL IN A RECENTLY LIBERATED CITY NEAR THE FRONTLINES OF THE WAR.

Yulia was one of many who chose to stay in her city throughout the invasion. When asked why she refused to flee, her answer was simple: This is her home, and she had no intention of leaving it.

In mid-September, more than 1,500 square miles of eastern Ukraine were liberated overnight. Cities and towns that had endured months of captivity behind the frontlines were finally free.

As reports of the liberation became public, journalists from around the globe poured into the newly accessible region—shocking the world with headlines of civilian executions, torture, mass graves, and bombed-out hospitals. Where schools, homes, and churches once stood, now laid heaps of ash and mountains of rubble—each marking horrors that had been committed in the shadows of conflict.

To meet the physical and spiritual needs of suffering families in eastern Ukraine, Samaritan’s Purse established another Emergency Field Hospital—this time, in a recently liberated city near the frontlines of the war. Earlier in the conflict, we ran a hospital in Lviv, in the west of Ukraine. 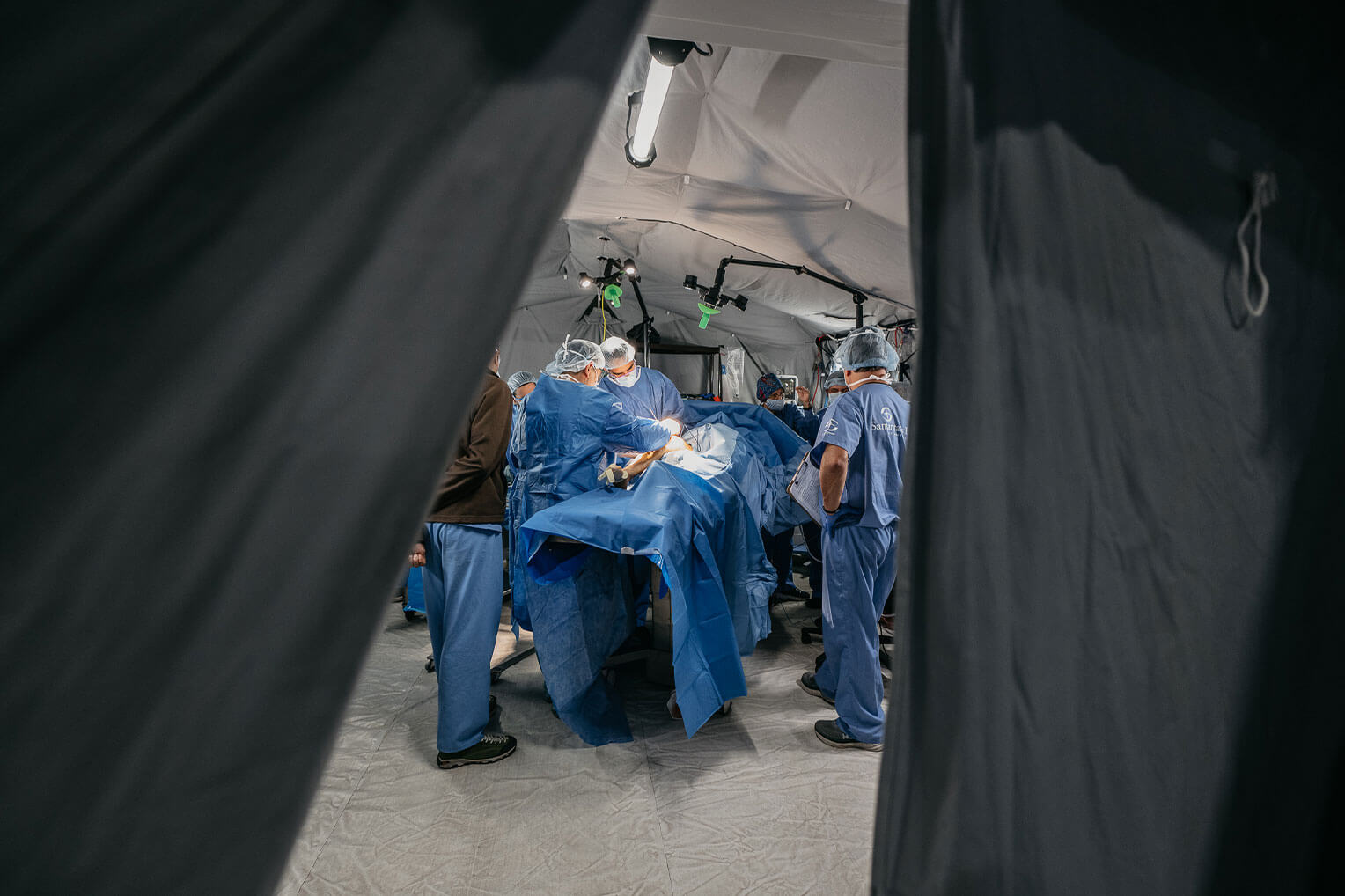 THE OPERATING ROOM WAS BUSY DURING OUR FIELD HOSPITAL DEPLOYMENT IN UKRAINE.

With the conflict remaining as unpredictable as ever, the ministry kept a low profile for our eastern response—diligent to protect staff members and patients. Earlier this month (December), the facility was handed over to the Ukrainian Ministry of Health for continued use in areas of need. This handover allows us to now share with our partners and fellow believers around the world much of what God did through this response.

Surviving the Horrors of War

“It was a very terrible experience.” Yulia said. “During the initial attacks, my neighbor and I hid in a basement. I remember there were several air raids and the bombs dropped near us.” Yulia went on to explain that as the first bombing finally stopped, it was nearly four in the morning. Hoping the bombardment was over, she and her neighbor slowly came up from the basement to see that everything had been decimated. “When we went outside, we saw there were no buildings—they were destroyed.”

Yulia shared that as the invasion continued, she often felt pain for an untreated medical condition she was experiencing. Her daughter and grandson fled to find safety, while Yulia stayed behind and cared for her paralyzed husband. Their food supply was low and the electricity was completely out. Yulia was not sure how they would survive. 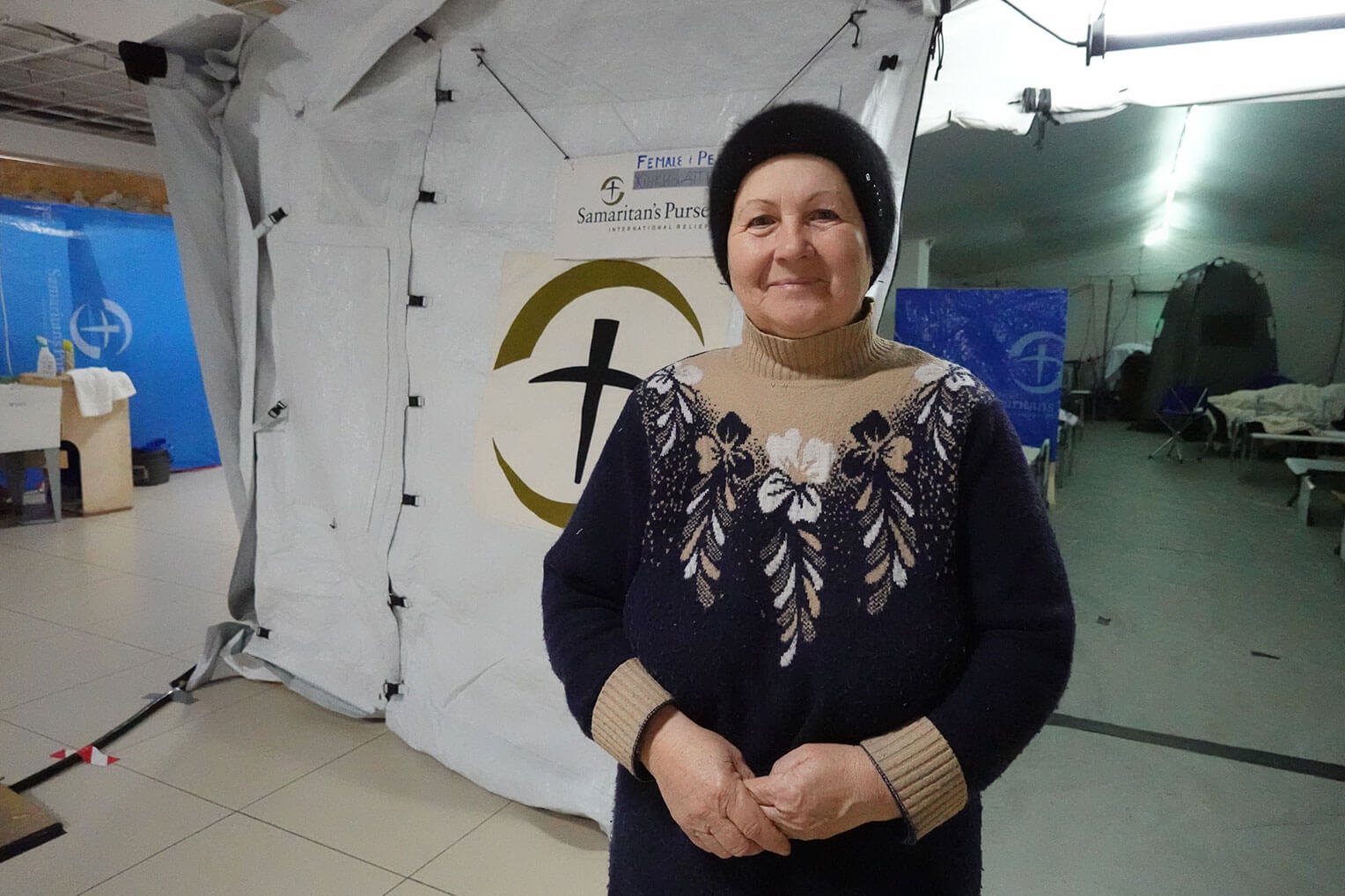 YULIA SAID OF OUR TEAM, “I HAVE NEVER EXPERIENCED THIS KIND OF CARE AND KINDNESS.”

Yulia spent months in hiding, suffering through intense pain and food rationing. Then, one day in September, Ukrainian soldiers arrived at her door and asked to see her identification papers. They shared with her that the occupation was over and that she was safe to come outside. “It was a really emotional day,” Yulia shared. “I couldn’t believe we had been liberated.”

Finding Nowhere Else to Go

Yulia, like many who seek treatment at one of our field hospitals, arrived by local ambulance, with nowhere else to take her. The local hospital in her city had been brutally shelled during the invasion and she needed medical assistance—soon.

As she stepped into the facility—which was strategically hidden among the sea of dilapidated buildings and homes—Yulia was taken into the emergency room. There, our doctors and nurses from all over the world began to examine her condition. Her pain was intolerable, making her too sick to speak or even sit up properly. 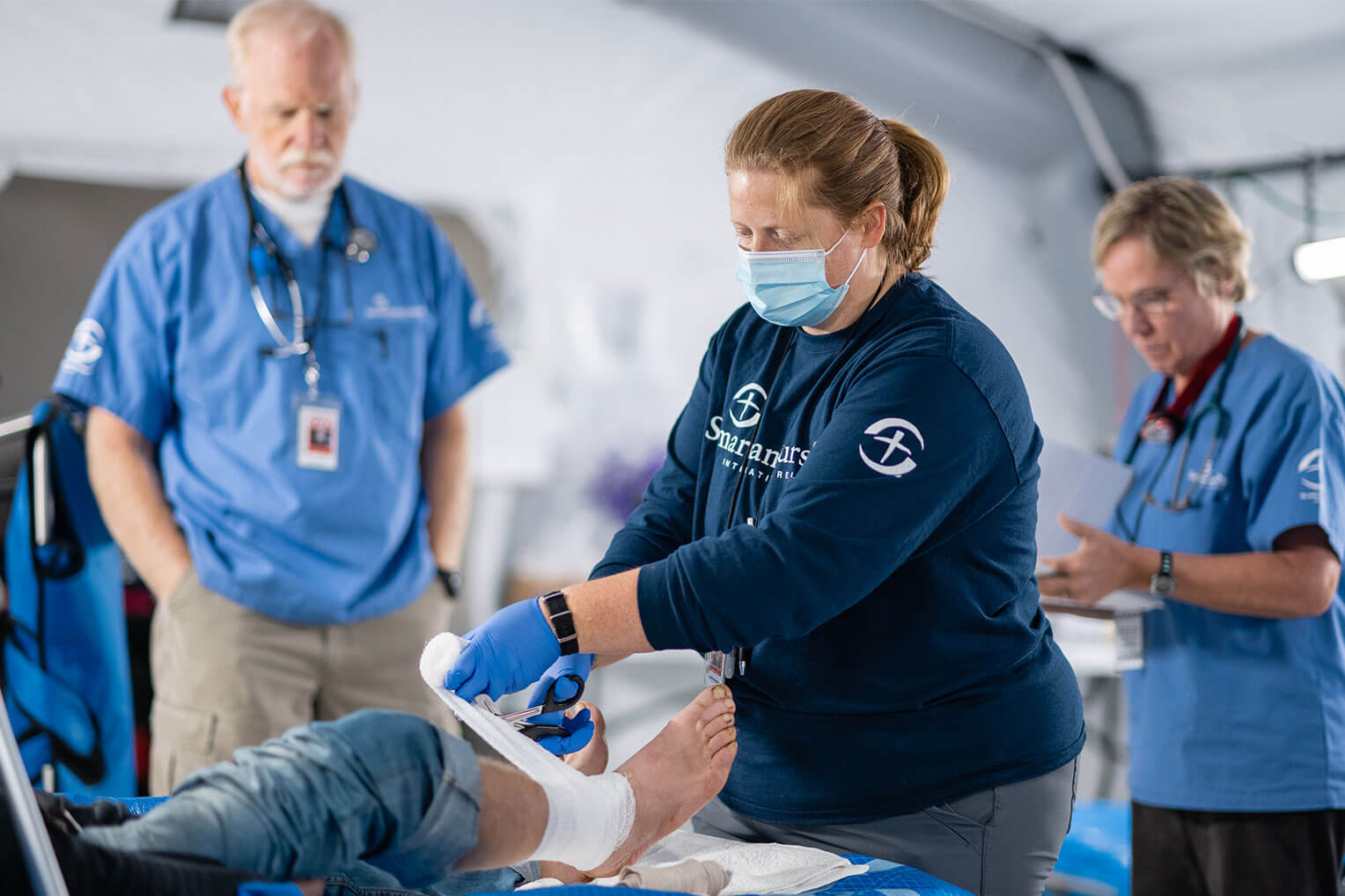 SAMARITAN’S PURSE DART MEMBERS TREATED EVERY PATIENT WITH CARE AND DIGNITY, SERVING THEM IN JESUS’ NAME.

Yulia explained to our staff that she had visited a local doctor in February. He told her that she had gallbladder stones which were dangerously large and needed to be removed, but before she could schedule the procedure, the war began. As she spoke, a silent concern fell over the room—she had been on the brink of a medical disaster for more than eight months.

Yulia needed her gallbladder removed as soon as possible. Otherwise, she would likely go septic and possibly die.

Hours after arriving at the Samaritan’s Purse Emergency Field Hospital, Yulia received the critical surgery she had needed for more than eight months. She was treated with love and compassion and given the opportunity to tell her story of surviving the occupation.

As she prepared to be discharged from the hospital and return to what remained of her home, Yulia expressed her gratitude and said, “Your surgeon touched my wound and looked at me closely. He showed me his attention. Your nurses here are real sisters of mercy. I have never experienced this kind of care and kindness.”

For Yulia and the more than 3,500 other patients who received care at our Emergency Field Hospital in eastern Ukraine, the facility was so much more than a refuge for physical illness. The hospital became a beacon of light for those whose lives had been completely shattered by the darkness of war. More than 190 Samaritan’s Purse staff members bravely deployed to serve on this response in Ukraine.

In locations throughout Ukraine, Samaritan’s Purse staff in partnership with local churches have distributed over 100 million pounds of food, treated more than 23,500 patients across multiple medical facilities, and in all, have cared for more than 12 million people in need. 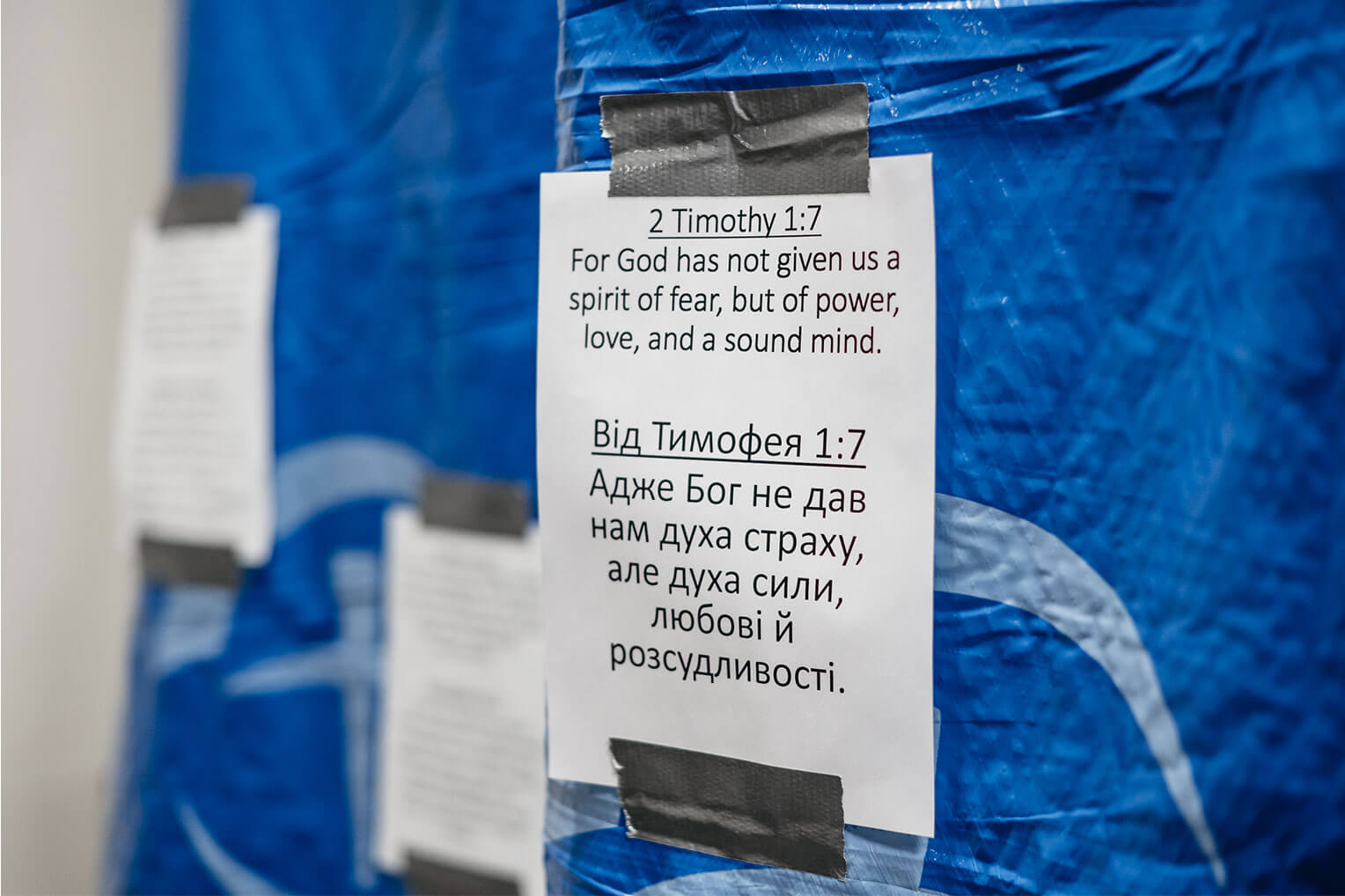 A BIBLE VERSE (2 TIMOTHY 1:7) POSTED IN THE FIELD HOSPITAL ENCOURAGES THE MEDICAL TEAM, PATIENTS, AND FAMILY.

We ask that you continue to pray for the families of Ukraine who have been impacted by this devastating war. In addition, pray for the Samaritan’s Purse staff and incredible church partners serving the vulnerable every single day.